The Dunkirk Free Library was built in 1904 with $25,000 of seed money from Andrew Carnegie. Over the years changes have occurred, from 1985-1987 major repairs and energy saving renovations were made to the building with library services and construction grants. In 1980, the downstairs storage area was converted into a children’s room and a full time children’s librarian was hired to help develop children’s programs.

The mission of our library is to provide unrestricted access to informational resources and services that advance lifelong learning, promote the acquisition of knowledge, encourage cultural enrichment, and provide strength to the Dunkirk community.

Our library services the city of Dunkirk and northern Chautauqua County. In January 1997 the library was connected to the internet and began using it as  a resource to answer reference questions. A public use computer was made available through a grant from Lake Shore Savings & Loan and the Northern Chautauqua Community Foundation working in partnership. That computer was booked almost every hour the library was open.

In 2000, our library received 4 computers through the Bill & Melinda Gates Foundation. A grant from Senator Pat McGee provided free computer instruction for adults on these computers. In 7 years, 7,000 adults signed up for free computer classes. The library now has 26 public computers.

The children’s room was upgraded with a $20,000 grant from the Dunkirk Rotary and District Rotary in 2004. Ten oak bookshelves were built by a master carpenter and new carpeting was installed.

A ten year capital campaign for handicapped access was successful and Picone construction was hired to begin the project April 7, 2007 and the project was completed in 2009. 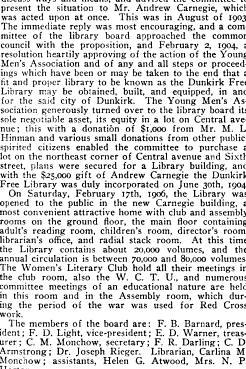 Excerpt from the History of Chautauqua County, New York, and Its People, Volume 1 from Google Books.

Annual Report to the Community 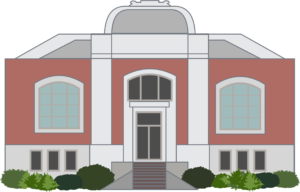